Hey Jude, don't carry the world upon your shoulders... 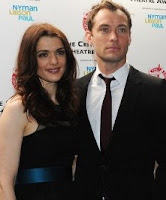 It almost seems boring, it's now so predictable. But the amount of theatre awards being won by the same people are only testament to the skill of their craft. Once again this weekend, it was Jude Law and Rachel Weisz who came out on top, both winning a Whatsonstage.com award for their performances in 'Hamlet' and 'A Streetcar Named Desire' respectively. The Shakespearian tragedy won on all fronts, with Sir Patrick Stewart picking up best supporting actor and the play itself being voted the best Shakespearian production. Rowan Atkinson and 'Oliver!' co-star Jodie Prenger also received awards for best musical role and best supporting actress respectively. In a slight twist, these awards were voted for by the public, but it seems critic or layman, they just can't enough of Rachel and Jude.
Posted by Kathryn at 16:06