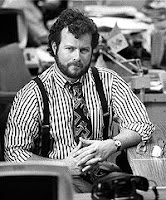 American journalist and author, Randy Shilts died in 1994, at the age of 42. Shilts' talent for writing became evident at a young age. Having majored in journalism at the University of Oregon, Shilts went on to become an award winning managing editor for the university's newspaper. Yet at the age of 20, he publicly came out as gay, a decision which was to have major repercussions, as he subsequently struggled to find a job in a homophobic media industry. After several years of freelance work, and a stint at the 'San Fransisco Chronicle', Shilts found his niche in novel writing.

'The Life and Times of Harvey Milk' was Shilts' first published novel, recounting the career and assasination of the gay politician. Such was the effect of the book, that it was made into a film in 2008 - a Sean Penn work, that won two Oscars and gained a further six Academy Award nominations. Likewise, his second major work, 'And the Band Played On', was also adapted for the big screen, attracting high profile cast members such as Richard Gere, Ian McKellen, Lily Tomlin and Alan Alda. Tragically, it was AIDS, a disease that Shilts had played a great part in bringing to the attention of the public, that claimed his life at such a young age.
Posted by Kathryn at 09:30

Labels: on this day, Randy Shilts