It is the green-eyed monster which doth mock... 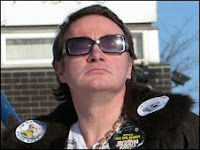 A man appeared in court yesterday, on charges of stealing a £3 million Shakespearian 'First Folio'. Published seven years after Shakespeare's death, the folio dates back to 1623 and is the only reliable source for at least 20 of his 38 plays. The world's largest collection of 'First Folios', 79, is located in the Folger Library in Washington D.C., and it was here that the investigation started which led to Raymond Scott's arrest. A man in possession of the book, which he claimed to have found in Cuba, walked into the library to enquire if it was genuine. Experts suspected it was stolen and tipped off the British Embassy and FBI. Scott, an antiques dealer, is accused of stealing the folio from Durham Universiy in 1998, and yesterday pleaded not guilty to all charges.