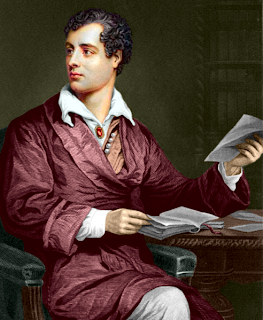 Romantic poet Lord Byron made his maiden speech at the House of Lords in 1812. Receiving his peerage at the age of 10, upon the death of his great uncle, Byron did not actually take his seat in the House until the age of 23. In the few years previous, Byron had been abroad on a 'Grand Tour' including Albania, Greece and Portugal, a journey customary for such noblemen.Yet in was in 1812 that Byron first spoke in Parliament, and on an issue, supposedly close to his heart, or a least, close to his birthplace.

The Luddite 'frame-breakers' in Nottinghamshire had taken to destroying the texile machines, products of the industrial revolution, that were putting them out of work. Under a new Tory bill, such workers would face the death penalty, and it was against this 'most unparalleled distress' and 'squalid wretchedness' that Byron spoke. Opponents thought the speech not 'at all suited to our common notions of Parliementary [sic] eloquence', and even Byron himself thought he came across as 'a bit theatrical'. As it happened, the publication of 'Childe Harold's Pilgrimage' less than two weeks later, ensured Byron's success was in the poetic, rather than political, field.
Posted by Kathryn at 16:24