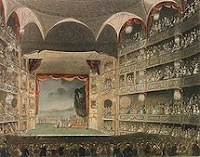 London's Drury Theatre, already in its third incarnation, burnt down in 1809. The site itself dates back to 1663, making it London's oldest theatre, yet following first a fire, then demolition, then another fire, the building today is the theatre's fourth. The particular installment that burnt down in 1809, had only been built 15 years previously, in an attempt to increase the capacity and therefore success of the theatre. This was duly achieved, and £160,000, 3,600 spectators and five tiers of gallery later, the building was completed.

Yet disaster was close at hand. Following a failed assassination attempt on King George III in 1800, a frequent visitor to the performances, the theatre was razed to the ground only nine years later, spelling ruin for the, already financially unstable, owner, Richard Sheridan. The Grade I listed building, now owned by Andrew Lloyd Webber, has received the support of aforementioned royalty, diarist Samuel Pepys, Poet Laureate Colly Cibber and, in  recent times, Monty Python. 'Oliver!' is the current production performed at the theatre.
Posted by Kathryn at 20:07