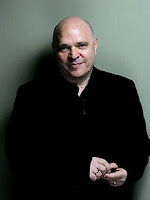 Anthony Minghella, British director and playwright, died in 2008 at the age of 54. Born on the Isle of Wight to ice cream factory owners, Minghella produced his first work at the age of 21. Many of his most famous directorial works, naturally, have a literary bent.

Critically acclaimed, 'The English Patient', winner of 9 Oscars and 6 BAFTAs, is based on novel Michael Ondaatje and his second best known work, 'Cold Mountain' which stars Jude Law, is similarly based on a novel by Charles Frazier. Most recently, in a drama produced just prior to his untimely death, it was Alexander McCall Smith, author of 'The No.1 Ladies' Detective Agency', that provided his inspiration. Perhaps, when looking back over his career, it is no surprise that it is those productions based on true literary foundations, that have made the best films.
Posted by Kathryn at 23:07