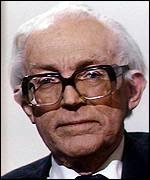 Former Labour leader Michael Foot, has died today at the age of 96. Not necessarily a name which springs to mind in connection to literature, yet one who work has no doubt contributed to the field. Born into a family of Parliamentarians, albeit from a liberal background, Foot seemed almost destined for political success. Converted to socialism by the influence of the Oxford University Labour Club, and by visits to impoverished areas, Foot's first foray into the political environment was as a journalist for the traditionally left-wing, 'The New Statesman'.

Thus followed numerous other authorial adventures, including a biography of H.G. Wells, culminating in the publication of his book, 'Guilty Men'. Written with colleagues under the pseudonym 'Cato', the work sought to attack 15 men, many of whom were Conservatives, for their policy towards Nazi Germany and so is called the 'classic denouncement of appeasement'. He won his first seat for Labour in 1945, and thus followed 35 years in and out of office, before assuming the position of Leader of the Opposition. Yet after a landslide defeat to Thatcher in 1983, Foot resigned, being replaced by Neil Kinnock. As of his 93rd birthday in 2006, Foot became the longest lived leader of a major British political party.
Posted by Kathryn at 17:22

Labels: on this day, politics