What! Can the devil speak true?... 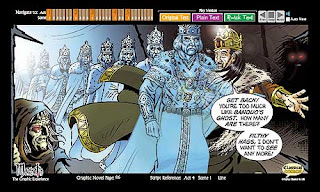 Shakespeare doesn't relate to the modern age, or so we often hear said as an excuse. Yet, as if it did anyway, that excuse will no longer wash, as an interactive graphic novel of 'Macbeth', is set to be introduced in schools. Produced by Classical Comics, the 'novel' combines the artwork of Jon Haward, with the voiceovers of  Juliet Stevenson and experienced Shakespearian actor Derek Jacobi, to create the ultimate multimedia experience. Jacobi himself, described the project as 'truly inspirational, creating, as it does so magnificently, an accessible and fascinating mix of visual and audible drama'. Readers are able to either flick through one panel at a time, or deploy 'movie mode' complete with language and context notes. If successful, Classical Comics is plaaning to release a whole new range, including such titles as 'Romeo and Juliet', 'Julius Caesar' and 'A Midsummer Night's Dream'. Yet many, not without justification, will argue, that it is yet another method of diluting and so damaging the rich literary culture of our country.
Posted by Kathryn at 23:20