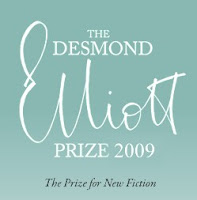 The shortlist for the Desmond Elliott Prize has been announced. The award, set up in 2007 in honour of publisher and literary agent Desmond Elliott, honours debut novels published in the UK.The list includes advertising guru David Abbott for 'The Upright Piano Player', and acclaimed poet Jacob Polley for 'Talk of the Town'. Judging chair Elizabeth Buchan said of the nominees, 'this is a truly eclectic list which ranges over time and cultures and reflects the passion and integrity of the writers..it is thrilling to see such a high standard, such diversity and such colour'. The winner of the £10,000 award will be announced on June 23rd.
Posted by Kathryn at 19:24