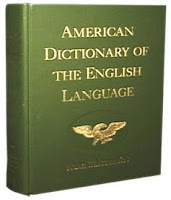 Noah Webster's 'An American Dictionary of the English Language', was first published in 1828. A Yale-educated lawyer, Webster had an avid interest in language and education, teaching in order to pay his university fees. From his experiences, Webster came to the conclusion that elementary education was extremely unsatisfactory, especially in its reliance on English textbooks. So he decided to publish his own volume, consisting of a speller, grammar and reader. The speller in particular, known as the 'blue-backed speller' was immensly popular, sparking the national spelling bees and selling over 100 million copies.

Denouncing the 'clamour of pedantry' that surrounded English grammar and pronunciation, and beleiving the spelling rules to be unecessarily complex, he wrote a dictionary comprising over 10,000 'Americanisms'. Including the replacement of 'colour' with 'color' and 'center' with 'centre', the dictionary originally only sold 2,500 copies, forcing Webster to mortgage his own house to publish a second edition. Yet the dictionary found more permament success, and indeed still exists today in the form of the Merriam-Webster Dictionary.
Posted by Kathryn at 19:08

Labels: Noah Webster, on this day