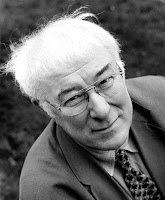 Irish poet Seamus Heaney was born in 1939. Born himself in Northern Ireland, Heaney believes his background to contain significant tension, containg both the Ireland of the cattle-herding Gaelic past and the Ulster of the Industrial Revolution. It was whilst studying English language and literature at university, that Heaney red Ted Hughes' 'Lupercal', and, in his words, 'suddenly, the matter of contemporary poetry was the material of my own life'. Subsequently, Heaney was introduced to the poetry of Patrick Kavanagh and then joined the Belfast group of young poets, publishing his first collection, 'Eleven Poems', at the age of 26.

Thus has followed a highly succesful literary career, spotted with numerous teaching posts, including the Professor of Poetry at Oxford University. He has written 11 main collections, the last of which won the T.S. Eliot Prize, as well as two plays and several popular translations. Much of his work has, at times, a distinctly nationalistic feel, and Heaney himself even objected at being included in the 1982 'Penguin Book of Contemporary British Poetry'. Yet surely his crowning achievement was being awarded the Nobel Prize for Literature in 1995, for 'works of lyrical beauty and ethical depth, which exalt everyday miracles and the living past'.
Posted by Kathryn at 20:10

Labels: Nobel Prize for Literature, on this day, Seamus Heaney