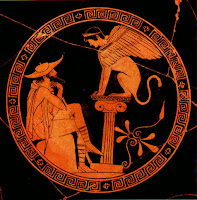 Homeric hero Odysseus is calculated to have returned home from the Trojan War. King of Ithaca, Odysseus, or 'Ulysses' in Latin, was one of the Greek warriors charged with bringing the abducted Helen back to her husband. Thus follows the legendary 10 year long Trojan War as recorded in 'The Illiad'; a war through which names such as Agamemnon, Achilles and Hector, as well as of course the Trojan horse, have all achieved hero status.

Yet 'The Odyssey', the second of Homer's epic poem, charts Odysseus' return home to his island home and wife Penelope; an adventure that takes a further 10 years and recounts stories of captivity, storms, sirens and the cyclops Polyphemus. Upon his return, Odysseus enters the household as a beggar and discovers his wife is already being courted by a number of suitors. Yet when a competition is organised, to string Odysseus' bow and shoot it through a dozen axe heads, Odysseus alone is able to, his disguise is lifted and the pair are reunited. Probably composed near the end of the 8th century BC, the works are fundamental to the Western canon. The dactylic hexameter used has since been closely replicated in other classical poetry, notably Virgil and Ovid.
Posted by Kathryn at 12:59

Labels: classics, Homer, on this day