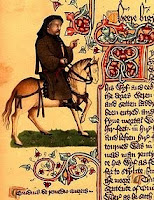 Geoffrey Chaucer supposedly told 'TheCanterbury Tales' for the first time, at the court of King Richard II in 1397. Chaucer scholars have also identified this date, in 1387, as the start of the book's pilgramage to Canterbury. Considered Chaucer's magnum opus, the work is a collection of stories told by a group of pilgrims as they journey from Southwark to the shrine of Thomas Becket at Canterbury Cathedral. It is written in Middle English, and widely credited for popularising the use of the English vernacular in literature, as opposed to French or Latin.

Including such tales as that of the Knight, Miller and Cook, Chaucer deftly explores the context of the 14th century, especially the religious turmoil that was propelling the Catholic Church into the Great Schism. Although suggested only to have been distributed to close friends in his lifetime, Chaucer's tales have since exploded in popularity. Now considered one of the greatest worksin English literature, 'The Canterbury Tales' has also seen a number of translations and adaptations, such as Margaret Atwood's 'The Handmaid's Tale', and Peter Ackroyd's recent retelling.
Posted by Kathryn at 20:29

Labels: Geoffrey Chaucer, on this day