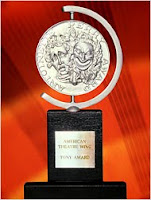 The nominations for this year's Tony Awards have been announced. It barely exudes any surprise that Jude Law's portrayal of Hamlet, has once more taken centre stage, yet competition for his category, 'Best Broadway Actor', is unexpectly strong, with both British actor Alfred Molina, and American Denzel Washington also nominated. As far as the musicals are concerned, Green Day, perhaps more used to Emmy nominations as opposed to Tony's, feature for 'American Idiot' - the satge version of their best selling album. Sarah Ruhl's 2009 drama, 'In the Next Room', and John Logan's 'Red', are also recognised. The awards will be announced on June 13th.
Posted by Kathryn at 10:36