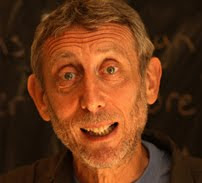 Children's poet Michael Rosen was born in 1946. With ancestry that included Polish Romanian and Russian blood, Rosen considered himself as part of 'the Jewish East End tradition'.Rosen himself describes the moment in which he uncovered his literary potential; 'Sometime around the age of twelve and thirteen I began to get a sense that I liked writing, liked trying out different kinds of writing, I tried writing satirical poems about people I knew'.

Shortly after graduating from university, Rosen began work for the BBC, presenting a series called WALRUS - Write And Learn, Read, Understand, Speak. Yet he said that the work forced his 'creativity down the spout', and in 1972 he was sacked due to failing vetting procedures. Instead his turned to writing his own material, and published his first book of poetry for children, 'Mind Your Own Business', in 1974. Success followed, as did such well-known collectiosn as, 'Wouldn't You Like to Know', and 'You Tell Me'. In 2007, Rosen was chosen as Jacqueline Wilson's successor to the post of Children's Laureate - a position he said that he was 'privileged' to attain. Besides literature, Rosen has also stood as a candidate for the Respect Party in 2004.
Posted by Kathryn at 22:06

Labels: Michael Rosen, on this day