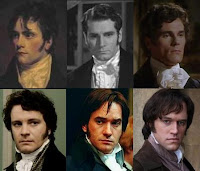 One of Britain's best loved books is once again to be made into a film. Jane Austen's classic, 'Pride and Prejudice', is set to be adapted by Papercut Productions, with filming starting next month in Colorado. The film has a lot to live up to. Both the 1995 BBC series, starring the unmissable Colin Firth as Mr. Darcy, and to a lesser extent, the 2005 film version with Matthew MacFadyen in the same role, have achieved somewhat iconic status - something that the new film will surely be aiming for. However, the early signs look promising, as the Elizabeth Bennet of 2005, Keira Knightley is said to have read and loved the script. The film will star relatively unknown actors, with Maia Petee as Elizabeth, and Caleb Grusing, hoping to be the next dashing Mr. Darcy.
Posted by Kathryn at 21:58