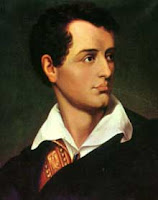 In imitation of the mythical Leander's visits to his beloved Hero, Lord Byron swam across the Hellespont in 1810. At the age of 22, Byron was 10 months into his tour of the Mediterranean - a visit that had already given rise to his first draft of 'Childe Harold's Pilgrimage'.

The one mile of cold waters, took one hour and ten minutes to complete after a failed first attempt, and Byron later wrote of it in his journal; 'I plume myself on this achievement more than I could possibly do on any kind of glory, political, poetical, or rhetorical'. As with so many of his adventures, the philhellene Byron committed it to words, writing the imaginatively named poem, 'Written After Swimming from Sestos to Abydos'.
Posted by Kathryn at 21:33

Labels: Lord Byron, on this day