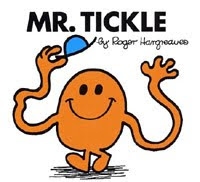 Children's author and illustrator Roger Hargreaves, was born in 1935. Hargreaves began by working in his father's laundry and dry-cleaning business, yet after a year had moved to advertising. Before finding his literay feet, Hargreaves originally wanted to become a cartoonist, and wrote his first book, 'Mr. Tickle', whilst creative director at a London firm. The idea is said to have appeared after one of his sons, Adam, asked Hargreaves what a tickle looked like. A round orange body and long rubbery arms later, the idea was born.

Despite struggling to obtain a publisher at first, the 'Mr. Men' series became an instant success, selling over one million copies within three years. Such was their popularity, that the BBC produced an animated TV series called the 'Mr. Men Show', an idea that was to be replicated upon the publication of the 'Little Miss' series in 1983. Although Hargreaves enjoyed later successes with the 'Timbuctoo' series amongst others, it is for the 46 Mr. Men, and 33 Little Miss books, that he is best remembered, with favourite titles including, 'Mr. Bump', 'Little Miss Sunshine', and 'Mr. Happy'. Hargreaves died of a sudden stroke in 1988, at the age of 53.
Posted by Kathryn at 14:05

Labels: on this day, Roger Hargreaves