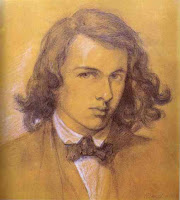 Painter and poet Dante Gabriel Rossetti was born in 1828. The son of an Italian emigrant, Rossetti was originally named Gabriel Charles Dante, yet chose to use the latter in honour of 13th century poet Dante Aligheri. Like his siblings, who included devotional writer Christina Rossetti, Dante aspired to become a poet. However, his interest in medieval art proved stronger, and he trained at the Antique School of the Royal Academy. It was following an exhibition by William Holmunt Hunt, that Rossetti, with John Everet Milais, formed the group that he would ultimately be remembered for - the Pre-Raphaelite Brotherhood.

Many of his most famous paintings were inspired by model, and later his wife, Elizabeth Siddal, yet the muse for 'Persephone', arguably his most famous work, was though to be a mistress. Rossetti was also the creator behind several famous poetry collections, including; 'The Early Italian Poets', the controversial 'Poems by D.G. Rossetti', and 'Ballads and Sonnets', of which possibly the best known poem is, 'The Blessed Damozel'. In his later life, Rossetti acquired an obsession for exotic animals, reputedly becoming the owner of a wombat, llama and toucan, the latter of which he forced to wear a cowboy hat, and ride the llama around the dining table for amusement, Rossetti died in 1882, aged 53.
Posted by Kathryn at 19:23

Labels: Dante Gabriel Rossetti, on this day, the pre-Raphaelite Brotherhood