All that glitters is not gold... 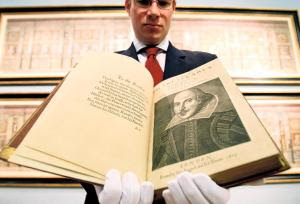 The Shakespeare folio at the centre of a controversial robbery trial has been display for he first time in a decade. The first edition work, dating back to 1623, was handed into Washington's Folger Library by ostentatious book dealer Raymond Scott under the pretext of him having been leant it by some Cuban associates. Suspicious of the 'damaged, bruised and mutilated' folio, the FBI started a investigation, leading to he belief that Scott had stolen the work from the Cosin Library at Durham University. Reportedly in debt to the tune of £90,000 due to a young Cuban waitress, Scott, wearing tradmark £300 Tiffany glasses and a diamond ring, was today in the dock as the folio was examined. The trial is set to continue for another four weeks.
Posted by Kathryn at 21:23