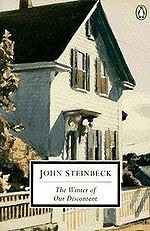 John Steinbeck's 'The Winter of Our Discontent' was published in 1961. Based, like so much of Steinbeck's work, on a society corrupted by idealisation, the title of the novel comes from a line of Shakespeare's 'Richard III' - 'now is the winter of our discontent made glorious summer by this son of York'. Yet the book unfortunately, did not reach the heights of Shakespearean acclaim. Although some believed that Steinbeck returned to the 'high standards...and to the social themes that made his early work so impressive, and so powerful', others claimed that 'serious readers' had justifiably stopped reading Steinbeck years ago. Sadly, Steinbeck died of a heart attack in 1968, making 'The Winter of Our Discontent' his last novel.
Posted by Kathryn at 21:06

Labels: John Steinbeck, on this day