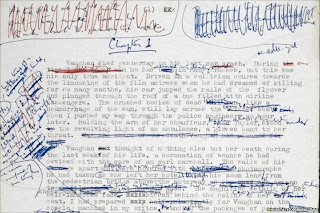 Following his expressed wish, the archive of science fiction author J.G Ballard has been acquired for public viewing. Ballard, who died last year at the age of 78, is most famous for his award-winning novel 'Empire of the Sun'. Now, 15 large storage boxes, containing an 'extraordinary insight' into his writings and covering his output from 1962 to 2008, have been obtained by the British Library. Items range from corrected manuscripts, notebooks of ideas, and even more personal articles, including childhood photos, reports and passports. Jamie Andrews, head of Modern Literary Manuscripts at the British Library, deemed the acquisition 'hugely exciting', and hopes that the archive will be fully accessible by the summer of 2011.
Posted by Kathryn at 14:31