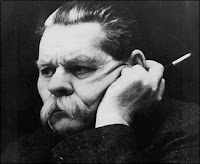 Soviet author Aleksey Maksimovich Peshkov, better known as Maxim Gorky, died in 1936 at the age of 68. An orphan by the age of 10, Gorky ran away from home two years later to live with his grandmother, whose death deeply affected him and led to a suicide attempt at 19. Thus followed a nomadic period, as Gorky travelled around the Russian Empire on foot and dabbed in various occupations, before settling on local journalism. It was then that he assumed his pseudonym, Gorky, literally meaning bitter, reflecting his anger at Russian life and thus also demonstrating a desire to speak the truth, however harsh it may be. Yet it was the release of his first book, 'Essays and Stories', that established Gorky's wider literary success.

Thus started an outpouring of writings, as Gorky believed it a political duty to produce such works, ignoring the more aesthetic tendancies of his English contemporaries. He rapidly became associated with the growing Marxist movement, and, opposing the tsarist regime, also became increasingly supportive of Lenin and his Bolshevik movement, often being imprisoned for such fraternisation. Gorky spent large periods of the next few decades in Italy, returning only for material needs or at Stalin's behest - Stalin himself was even a pallbearer for Gorky's funeral. Considered a founder of the socialist realism movement, Gorky's most famous works include 'The Lower Depths', and 'The Life of Klim Sangin'.
Posted by Kathryn at 18:29