We will not be shushed... 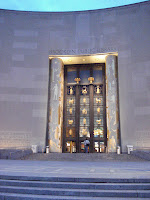 Forget the RMT picket lines, the BA demonstrations, and South African football steward boycotts. New York's public chose a more refined literary manner in which to protest against cost cutting measures, by staging a 24 hour 'read-in' in the steps of Brooklyn public library. From the romantics to the radicals to the rude, (readings of erotica were restricted to the hours of midnight to 7am), volunteers took it in 15 minute shifts to read aloud to passersby from 5pm on Saturday to 5pm on Sunday - an event attended by more than 1,200 people. The 'We Will Not be Shushed' campaign is demonstrating against proposed funding cuts, that would lead to the closure of 40 of the city's libraries, and hopes that the weekend's event, will show that, 'library services are essential to the social, cultural and educational fabric in New York City'.
Posted by Kathryn at 17:26