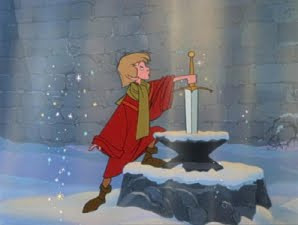 T.H. White's 'The Sword in the Stone' was published in 1938. A very popular book, the work subsequently became the first volume in 'The Once and Future King' tetralogy - White's own version of the Arthurian legends. The plot surrounds a boy named Wart, befriended and tutored by the wizard Merlyn, whose removal of the sword from the stone proves him to be a true born king of England, later King Arthur. The success of the series, prompted Lerner and Loweto buy the rights of the last three books for their own version, 'Camelot', making White, for a time, a wealthy man. However, perhaps sadly for the novel, Disney's adaptation of the story in 1963 has become the far more popular medium.
Posted by Kathryn at 17:01

Labels: on this day, T.H. White