Sound of the Underground... 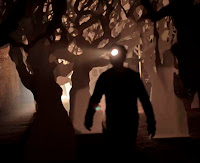 Theatre can be staged almost anywhere - in purpose-built auditoria, in classrooms and parks - the possibilties are practically endless. However, when Beth Steel penned her debut play, she probably did not imagine that it would be performed in underneath the West End. 'Ditch', a dystopian work set after the collapse of civilisation, has become the first play to be staged in a labyrinth of disused tunnels under London's Waterloo Station. The tunnels, which are frequently penetrated by the sounds of passing trains, were obtained by the Old Vic earlier this year, and boast seats donated by graffiti artist Bansky.

Though some may doubt the effectiveness of such a location as a stage for drama, artistic director Sam Hodges believes that, 'the tunnels have is a sense of menace and a sense of scale that helps the drama'. However, it is the actors which have it tough says Hodges, 'there's a dank smell, it gets into your skin - and they've had to do without the traditional showers and, indeed, toilets'. A guided tour of the venue, can be seen here
Posted by Kathryn at 15:46