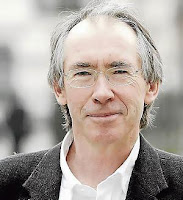 British author Ian McEwan was born in 1948. The son of a Scottish army officer, McEwan enjoyed a largely nomadic childhood, experiencing such places as East Asia, Germany and North Africa. Having attended university under the watchful eye of author and academic Malcolm Bradbury, McEwan published his first work, short story collection 'First Love, Last Rites', in 1975 to great critical acclaim, winning the Somerset Maugham Award the next year. The controversy that many would now associate McEwan with, found its airing not long afterwards as his play 'Solid Geometry' was suspended by the BBC for obscenity - the incident preceeding a string of novels, who were so thematically disturbing, that they led McEwan to acquire the nickname, 'Ian Macabre'.

Yet it was in 1997, with novel 'Enduring Love', that his commerical literary career really took off. Soon followed a Booker Prize for 'Amsterdam', McEwan's most famous work hit the shelves in 2002 - 'Atonement' receiving widespread praise and demonstrating its popularity in the Oscar winning film adaptation starring Keira Knightley and James McAvoy. The seemingly endless production of brilliant novels continued with the publication of 'Saturday' and 'On Chesil Beach', while McEwan's latest offering, 'Solar', has been in circulation for just four months. McEwan, arguably one of the more successful British writers of recent years, has been nominated for the Booker Prize six times.
Posted by Kathryn at 19:59

Labels: Ian McEwan, on this day