RSC return to the Roundhouse... 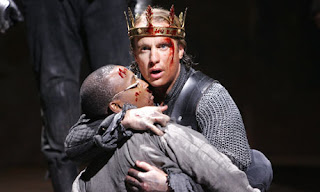 Following a successful season in 2008, the Royal Shakespeare Company will be returning to London's Roundhouse theatre. Replicating the temporary Courtyard Theatre which is currently being used by the company in Stratford-upon-Avon, the 750 seat 'intimate auditorium' particularly lends itself  to spectacular historical staging, based around the two central columns of the building. The six play tour, opening with Romeo and Juliet and also comprising of Antony and Cleopatra, Julius Caesar, As You Like It, The Winter's Tale and King Lear, will boast a 44 member cast who will aptly demonstrate 'the broadest scope of human experience' that artistic director Michael Boyd believes the reportoire encompasses. The eagerly awaited season is set to start in November of this year.
Posted by Kathryn at 20:16