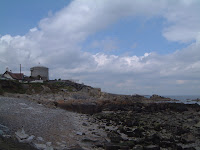 James Joyce moves into Sandycove's Martello Tower in 1904. Originally a defensive outpost against a Napoleonic invasion, the tower was leased from the British War Office by Joyce's friend Oliver St. John Gogarty. However, after reports of numerous fracas, including one in which Gogarty pointed a gun in his direction, Joyce left the dwelling after only a week.

Yet despite being such a fleeting moment, the experience was immortalised in Joyce's most famous work 'Ulysses'. With Gogarty depicted as the 'stately, plump Buck Mulligan', their relationship is explored within the first chapter. The tower has subsequently appeared on bank notes, and numerous covers of the novel, and currently houses a museum dedicated to the writer
Posted by Kathryn at 17:40

Labels: James Joyce, on this day