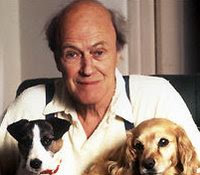 Children's author Roald Dahl was born in 1916. Although raised in Cardiff, Dahl's ancestry lay in Norway, and tales of summer visits back to his native land are recounted in autobiographical work 'Boy: Tales of Childhood'. Indeed, many of his stories find their origins in Dahl's youth. 'Charlie and the Chocolate Factory' was the result of Cadbury's sending boxes of new chocolates to his school to be tested by the pupils, and Dahl dreaming of concocting his own creations.

Once he left school, Dahl became an employee of Shell, transferring to their Tanzanian branch, where he lived in comparative luxury. Like so many others, Dahl became embroiled in the Second World War, his five aerial victories in Africa, earning him the title of 'flying ace'. Dahl settled down after the war, marrying and having five children, yet two later died, and he dedicated the 'BFG' to one. Dahl's best known works include, 'James and the Giant Peach', 'Matilda', and 'George's Marvellous Medicine'. He died in 1990, at the age of 74, and was buried with snooker cues, chocolate and HB pencils.
Posted by Kathryn at 23:03

Labels: on this day, Roald Dahl