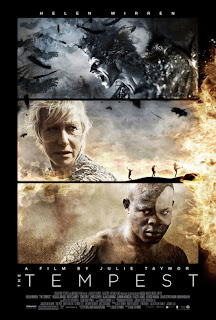 The image of slighted Duke Prospero conjuring a storm on the shores of the island, is one of Shakespeare's most memorable. Yet what if it was not Prospero, but Prospera? Dame Helen Mirren is set to turn the tables by starring as a female version of the protagonist in a new film adaptation of 'The Tempest'.

The idea for the change was instigated by Mirren herself. She says, 'All the relationships shift because she is female. There's the maternal relationship with her daughter - rather than a patriarchal one. She is a lot more vulnerable herself because she understands Miranda's emotional life and need for romance...I am actually convinced that were he [Shakespeare] writing in the modern day, he would have made Prospero into a woman'. Also starring Russell Brand and Alfred Molina, the film was shot on a Hawaiian island, and is set to be released in December.
Posted by Kathryn at 23:33