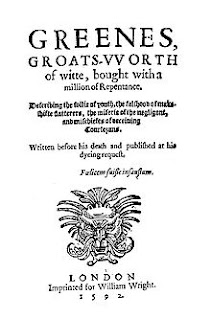 Robert Greene's 'A Groats-Worth of Wit bought with a Million of Repentance' was published in 1592. Although he had died three weeks prior, the pamphlet was to become Greene's best known work, mainly for its references to a young William Shakespeare. Quoting lines from 'Henry VI, part 3', Greene wrote; '"...for there is an upstart Crow, beautified with our feathers, that with his Tygers hart wrapt in a Players hyde, supposes he is as well able to bombast out a blanke verse as the best of you: and being an absolute Johannes fac totum, is in his owne conceit the onely Shake-scene in a countrey'.

Greene's 'groat', equivalent in the day to a fourpenny coin, appeared to be that Shakespeare was a plagiarist, but many commentators believe that it was merely a written expression of jealously. So extravagant was Greene's outburst, that it has even been speculated, by critics such as Stephen Greenblatt, that he may have been the model for Shakespeare's jovial Falstaff.
Posted by Kathryn at 20:30