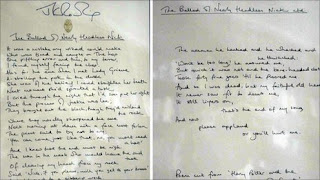 The final book may have been published, but Hary Potter fans have been handed another exciting unveiling. Original handwritten manuscripts by author J.K. Rowling are going to be displayed to the public for the first time in Scotland this week. Donated by Rowling in 2005 to help fund a Scottish language dictionary, the two pages are  extracts from the series' second novel 'Harry Potter and the Chamber of Secrets' which didn't make it into final publication, including The Ballad of Nearly Headless Nick.

The works are being displayed as part of the Wigtown Book Festival, running form 24th September - 3rd October. This is a major scoop for a relatively small festival, and Potter fans must seize the opportunity, for as Gerrie Douglas-Scot, co-ordinator, said: 'this is a one-off exhibition and contrary to belief it is not on a world tour'.
Posted by Kathryn at 20:46