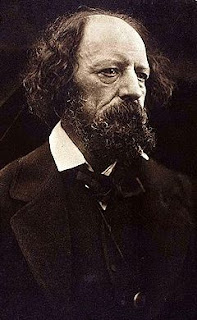 Victorian poet Alfred Lord Tennyson died in 1892, at the age of 83. A descendent of King Edward III, Tennyson was the fourth of twelve children, all of whom received an excellent supplementary education from their father, a rector. Tennyson first published poetry at 17, yet it was at Cambridge University where his literary career blossomed, as he won the Chancellor's Gold Medal, and came to the attention of Samuel Taylor Coleridge with his first solo collection of poems, 'Poems Chiefly Lyrical'.

It was there that Tennyson met someone who was to become a major influence on his works - best friend Arthur Hallam. Hallam's sudden death at the age of 22 devestated the young Tennyson, who composed elegy 'In Memoriam A.H.H' and referenced him in many other poems, even naming his own son Hallam. Tennyson, a favourite of Queen Victoria, became Poet Laureate in 1850, following the death of William Wordsworth, becoming the man to hold the longest tenure before or since. One of Britain's most well loved poets, Tennyson has written many notable works, with the most famous including, 'The Lady of Shalott', 'Idylls of a King', 'Ulysses', and 'The Charge of the Light Brigade'.
Posted by Kathryn at 18:56