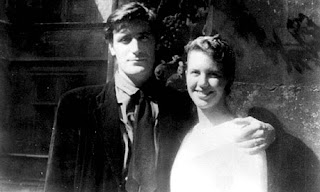 It is one of the most famous literary relationships, and now a poem in which Ted Hughes describes the night his first wife Sylvia Plath took her own life in 1963, has been published for the first time. Beginning with 'What happened that night? Your final night', 'Last Letter' details the events of Plath's final weekend. The poem was discovered by the guest editor of the 'New Statesman' Melvyn Bragg, who was directed to the piece by Hughes' second wife Carol.
Posted by Kathryn at 19:27