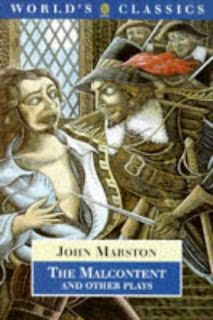 English poet and playwright John Marston, was born in 1576. The son of a lawyer, Marston followed his father's footsteps to Middle Temple, having completed his education at Oxford. Yet despite a censure for such activities in his father's will, Marston retained a passion for writing. Beginning with an imitation of the classics, Marston's short literary career stared with satire and epics, including the 'Scourge of Villanie', which some believe to have influenced some of Shakespeare's more unstable characters.

He soon entered the theatrical fray, working for Henslowe in 1599 and producing his debut work, 'Histriomastix'. Thus began the 'War of the Theatres', with Marston and Dekker on one side, and Jonson on the other. Both playwrights were frequently satirised in each other's works, and Jonson claimed to have beaten Marston, yet they were seemingly reconciled in later years. Having offended the king with a play, and cut short his writing career, Marston died in 1634 at the age of 57. Although not as well known as some contemporaries, Marston's most famous works include 'Antonio's Revenge', 'The Dutch Courtesan', and 'The Malcontent'.
Posted by Kathryn at 16:50

Labels: John Marston, on this day