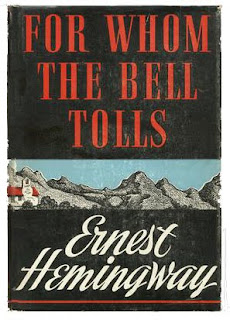 Ernest Hemingway's 'For Whom the Bell Tolls', was published in 1940. Coming 10 years after the publication of 'A Farewell to Arms', Hemingway's new novel marked his first real success since, with one critic commenting, 'Hemingway the artist is with us again; and it is like having an old friend back'. The title of the book is a quotation from John Donne's 'Devotions Upon Emergent Occasions', itself very famous, which starts with 'no man is an island, entire of itself..'.

Written partly while Hemingway was in Cuba, the work is based around his experiences in the Spanish Civil War, and thus depiction of death becomes its primary theme. Yet this has caused controversy about the style of Hemingway's narrative, as he, clumsily according to many, uses archaisms and transliterated Spanish to convey the sense of a foreign setting. The work was an undeniable success and sold over half a million copies within its first six months. It was also nominated for the 1941 Pulitzer Prize, yet the President of Columbia University decided that no award was to be given for letters that year, and so Hemingway's masterpiece was never recognised.
Posted by Kathryn at 16:20

Labels: Ernest Hemingway, on this day