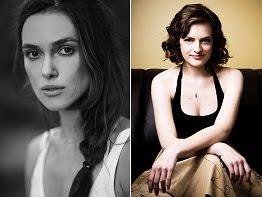 Following her success in an adaptation of Moliere's 'The Misanthrope', Keira Knightley is once again to take to this stage. Assuming the role of a teacher, Knightley will be performing in 'The Children's Hour', a play written by Lillian Hellman in 1934, and last produced in London by the National in 1994. She will be joined by Elisabeth Moss, best known from American drama series 'Mad Men' and 'The West Wing', and the two will open the production early next year.
Posted by Kathryn at 16:55