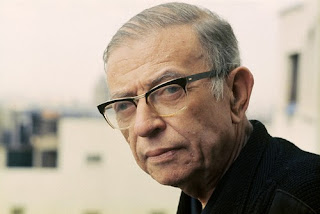 French writer and philosopher Jean Paul Sartre won and declined the Nobel Prize for Literature, in 1964. The first Nobel Laureate to voluntarily decline the prize, Sartre had a history for refusing awards, having previously turned down the Legion d'honneur in 1945. As it turned out, the embarassment to the the Swedish Academy could have been avoided, as it later transpired Sartre had written to them two weeks previously asking to be removed from the list of nominees.

However, this went unheeded, and so, on the 23rd of October, 'Le Figaro' published a statement by Sartre explaining the reasoning behind his refusal. His primary objection, was that he did not wish to be seen to be taking sides in an East vs. West cultural struggle by accepting an award from a prominent Western cultural institution. Sartre subsequently hid in a friend's house in a bid to escape the media attention.