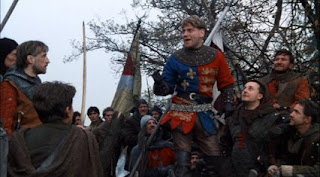 The army of Henry V defeated the French at the Battle of Agincourt in 1415. The event was to become the inspiration for Shakespeare's play written over 180 years later, and formed the last part of the historical tetralogy which included 'Richard II', 'Henry IV part 1', and 'Henry IV part 2'. A play renowned for its patriotic themes, a Laurence Olivier adaptation led to a resurgance in its popularity during World War Two. Arguably the most famous lines in the play are delivered on 25th October, in Henry V's pre-battle rallying cry - the St. Crispin's Day Speech:

And Crispin Crispian shall ne'er go by,
From this day to the ending of the world,
But we in it shall be remembered-
We few, we happy few, we band of brothers;
For he to-day that sheds his blood with me
Shall be my brother

Labels: on this day, William Shakespeare