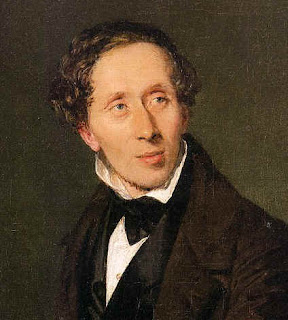 Danish storyteller Hans Christian Andersen re-enrolled at his local school in 1822, at the age of 17. Andersen had previously dropped out of education 6 years earlier, hoping to provide additional income for his struggling family. However, unsuited to a factory environment and rejected as a singer, dancer, actor and playwright, Andersen found himself back in school, supported by wealthy arts patron Jonas Collin.

Yet, stuck in a class of 11-year-olds and supposedly an unattractive boy, Andersen's school years were far form the happiest days of his life. Tormented, failing, and at the mercy of a temperatmental headmaster with whom he boarded, Andersen was the ultimate misfit, often driven to bouts of severe depression. It is in these haunting memories that many of his works have found their inspiration, such as 'The Ugly Duckling', and 'The Emperor's New Clothes'.
Posted by Kathryn at 20:12