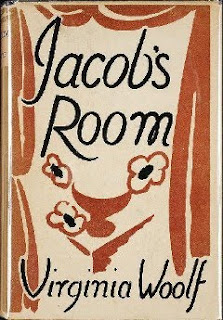 Virgina Woolf's 'Jacob's Room' was published in 1922. Her third novel, the work was the first full-length book published by the Woolfs' Hogarth Press, complete with cover designed by her sister. Thought to be a fictional biography of her late brother, Thoby Stephen, 'Jacob's Room' appears to be a turning point in Woolf's literary career, she herself writing in her diary of the achievement 'that I have found out how to begin (at 40) to say something in my own voice'.

Indeed the novel can be seen as a departure from her two previous books, 'The Voyage Out' and 'Night and Day', and instead adopts the more modernist and experiemental style that appears in her later works, such as 'To the Lighthouse' and 'The Waves'. Perhaps the most striking feature of Woolf's third novel, is the absence of the 'protagonist', as the readers' perception of Jacob is primarily formed through other characters' impressions.
Posted by Kathryn at 14:54

Labels: on this day, virginia woolf