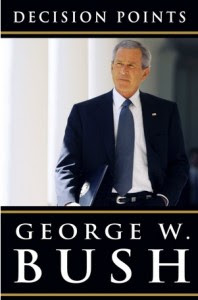 Although the political scene in the U.S. is preoccupied with the upcoming mid-term elections, a week later sees the release of a new book, 'written' by ex-President George W. Bush. 'Decision Points', will apparently not be a traditional memoir, but instead an account of the key decisions he made whilst in office. Frequently a figure of comedic gold in the press, it is interesting o see how the release is being reported in the U.S. The right wing Fox News channel, currently the broadcaster of the Tea Party Movement, quotes the publisher, stating the book will offer 'gripping, never-before-heard detail' on his 'historic achievements'. Compare this to Dean Obeidallah, a writer for the liberal Huffington Post, who has some suggestions on how Bush has managed to fill 512 complete pages:

1. Font Size: 96. That size font easily lets you fill a page with just a few words.

2. Blank pages so you can doodle: I'm sure Bush loved to doodle while reading. (I can imagine Bush exclaiming: "I'm a doodler!") These blank pages will let you doodle things that Bush would have likely drawn while reading a book, such as drawing a turkey by using your hand, the Texas Rangers' logo, Dick Cheney's head and other fun stuff. That's about 100 pages right there.

3. Favorite recipes: Bush will share recipes for his favorite foods like how to make a quesadilla, popcorn or a peanut butter and jelly sandwich. Making PBJ sandwiches are not as easy as they look as Bush will show us over 10 to 20 pages of his book.

4. Another 100 pages of Sudoku, word jumbles and connect the dots so you can fill the work day the same way Bush did on many days. The connect dots section will even draw things that Bush liked, such as Weapons of Mass Destruction - this can turn into a selling point for the book as Bush can exclaim: "I finally found the WMDs and so can you-They're on page 327 of my new book!"

5. Decision Points: Bush will complete the book by sharing with us some of the key decisions he made during his life such as: What nickname to give to Vladimir Putin? (Final decision: "Pootie Poot" - that's true); How to eat a pretzel and watch a football game on TV at same time? (Final decision: Don't do both together or could lead to choking- true again.)