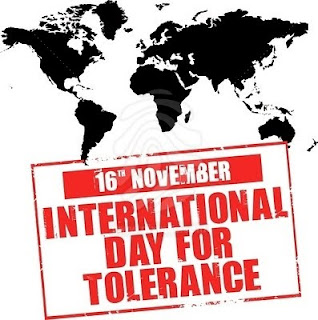 The International Day for Tolerance is celebrated. Declared by UNESCO in 1995, the aim of the day is to generate public awareness of the dangers of intolerance. The basis for this is found in the Universal Declaration on Human Rights, which states that we should 'should promote understanding, tolerance and friendship among all nations, racial or religious groups'.

Many regimes of intolerance have existed, and still do, all across the globe. In these circumstances, literature has often been used as medium through which the common person can shape their voice and express dissatisfaction with ideologies around them. The most famous works, are those that address the issue of race, especially the segregation found in '50s America and apartheid South Africa. Notable examples include Lee's 'To Kill a Mockingbird', and Coetzee's 'Dusklands'. Sexual discrimination has also been fought against, be it advocating the rise of women in late Victorian literature, such as 'A Doll's House', or raging against homophobia, seen in Radclyffe Hall's 'The Well of Loneliness'. Many such novels have caused controversy. They have been banned, burned and berated in equal measure. Yet as long as the act of written expression exists, there will be a voice to speak up for those who have none.
Posted by Kathryn at 21:33

Labels: on this day