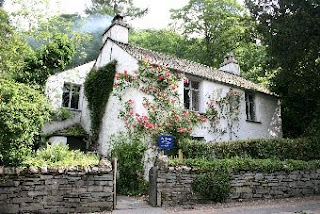 On this day...Romantic poet William Wordsworth and his sister Dorothy moved into Dove Cottage in 1799. The previous autumn had seen the pair in Germany, along with fellow poet Samuel Taylor Coleridge. One of his many trips to Europe, Wordsworth was reportedly homesick and thus it was in 1799 that he moved back to the Lake District - the region in which he grew up. His work at this time comprised of 'The Lucy Poems', a series of five poems later included in his 'Lyrical Ballads' collection. Living near Coleridge and Robert Southey, the trio became collectively known as the 'Lake Poets'.
Posted by Kathryn at 17:28