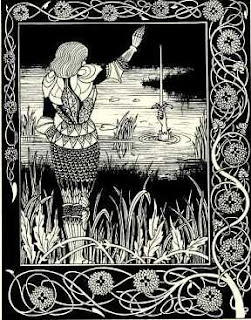 On this day...English author Thomas Malory died in 1471, at the age of approximately 66. The compiler of 'Le Morte d'Arthur', Malory translated the Arthurian romance tales of the King, Guinevere and Lancelot from French prose into eight books of Middle English verse, providing the basis for later literary works such as T.H. White's 'The Once and Future King', and Tennyson's 'The Idylls of the King'. Yet despite a lasting literary legacy, much uncertainty surrounds the man himself.

At least six Thomas Malorys were alive at the time of the books writing, and from those, three main theories have emerged as to the identity of the author. Firstly, it was proposed by John Bale, that Malory was Welsh, hailing from Maloria and related to the poet Edward Rhys Maelor. The second alias is that of Thomas Malory of Papworth St. Agnes - a respected, yet average, country gentlemen. Yet it is to the turn that most scholars look, Sir Thomas Malory of Newbold Revel. A soldier and politician in the early years of his life, Sir Thomas turned to thievery, rape and kidnapping, serving time in both Marshalsea and Newgate Prisons. The most popular claimant, it is this Thomas Malory who died 540 years ago.
Posted by Kathryn at 10:08