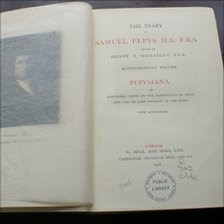 It has travelled with a naval commander to Hong Kong and Australia, but this week a rare library book has found itself back home in Wallington thirty years on. A 1928 volume of Samuel Pepys' Diary, part of a set worth an estimated £200, was taken out in 1981 by former Royal Australian Navy Commander Ron Robb to help his daughter with a school project. Yet shortly afterwards he returned back home from his posting in London, and did not rediscover the book until recently, when he was in the process of moving house.

Although, at the current rate Mr. Robb would face an overdue fine of more than £1,600, local Councillor Graham Tope has waived it and is just pleased to have the book returned, 'We've had the odd overdue library book, but 30 years must be a record..it's great that this valuable book has been returned to complete the set, particularly as they have been part of the library for so long'. The book is now back with the other volumes of the edition in Wallington Library's Mallison Room.
Posted by Kathryn at 10:29