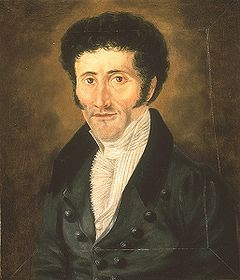 On this day...German author Ernst Theodor Wilhelm Hoffmann, better known as simply E. T. A. Hoffmann, died in 1822 at the age of 46. His father was a successful barrister, yet by Hoffmann's second birthday, his parents had separated and he was later to regret his paternal estrangement. Instead, he lived with his mother in Königsberg and was educated by his two aunts and uncle until his enrollment in a local school. Despite displaying a great talent for the arts from a young age, he was held back by his rural setting and took it upon himself to read Göthe and Rosseau, as well as attending lectures by Kant.

The next few years were spent travelling around Prussia in various capacities, trying his hand both at composing and drawing, before being exiled due to some controversial caricatures. A victim of the Napoleonic wars, Hoffmann was forced to return to Berlin, now married, and it was here that his literary career began in earnest, finding success with 'Ritter Gluck'. Yet finding daily work was becoming increasingly difficult, and with failing health, mainly attributed to alcohol abuse and syphilis, he left theatre management to become a jurist. It was to be his last job. Remembered as a pioneer of the fantasy genre, Hoffmann is best known for his work 'The Nutcracker and the Mouse King', on which the ballet is based, and his influence on later authors such as Edgar Allan Poe.
Posted by Kathryn at 12:20

Labels: E.T.A Hoffmann, on this day