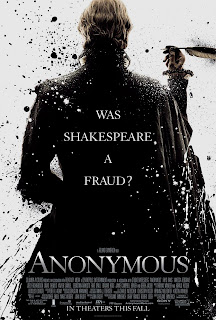 Yesterday saw William Shakespeare's name being removed from sign all around Warwickshire, the county of Startford-upon-Avon. One might think this a work done by vandals, or perhaps even vehement Marlowe fans, but it was in fact an act carried out by the Shakespeare Birthplace Trust as a campaign against new film 'Anonymous'. Premiering yesterday, and starring Rafe Spall, Rhys Ifans and Vanessa Redgrave, the film is just the newest medium by which people are seeking to put forward the argument that the man we know as Shakespeare was merely a 'barely literate frontman for the Earl of Oxford'.

Thus, in a backlash against this attempt to 'rewrite English culture and history', the Trust has put in place a campaign by which 9 road signs and 10 pub signs are being taped over, as well as a sheet being placed over a memorial in Stratford-upon-Avon itself. The trust said, 'Today's activity barely scratches the surface, but we hope it will remind people of the enormous legacy we owe to William Shakespeare of Stratford-upon-Avon'. The film 'Anonymous' is in cinemas from October 28th.
Posted by Kathryn at 10:52