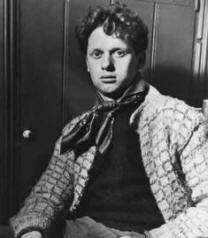 On this day...Welsh poet Dylan Thomas died in 1953 at the age of 39. The child of an English master and seamstress, Thomas was born in Swansea only months after the outbreak of the First World War. Despite his Welsh heritage, Thomas was brought up to speak only English, and continued to use the anglicised form of his name throughout his life. An ill child, and undistinguished student, Thomas spent his time keeping poetry notebooks and between the years of 1930 and 1934, accumulated over 200 entries which would later form over half of his published works.

Sadly it is Thomas' blighted personal life that seems to so often overshadow the remarkableness of his poetry. Having married a dancer in 1937, Thomas was considered to weak to serve in World War Two, instead writing scripts for the government. Indeed the immediate post war period was one of literary success, with the emergence two of his best known works, 'Deaths and Entrances', and 1953 radio play 'Under the Milkwood'. However, by now a committed alcoholic, Thomas soon took a turn for the worst. Whilst in New York to take part in his play, Thomas suffered black outs, turned blue and slipped into a coma, before finally dying of pneumonia. Despite his tragic and early death, Thomas is still celebrated as one of the nation's best loved poets.
Posted by Kathryn at 11:00

Labels: Dylan Thomas, on this day